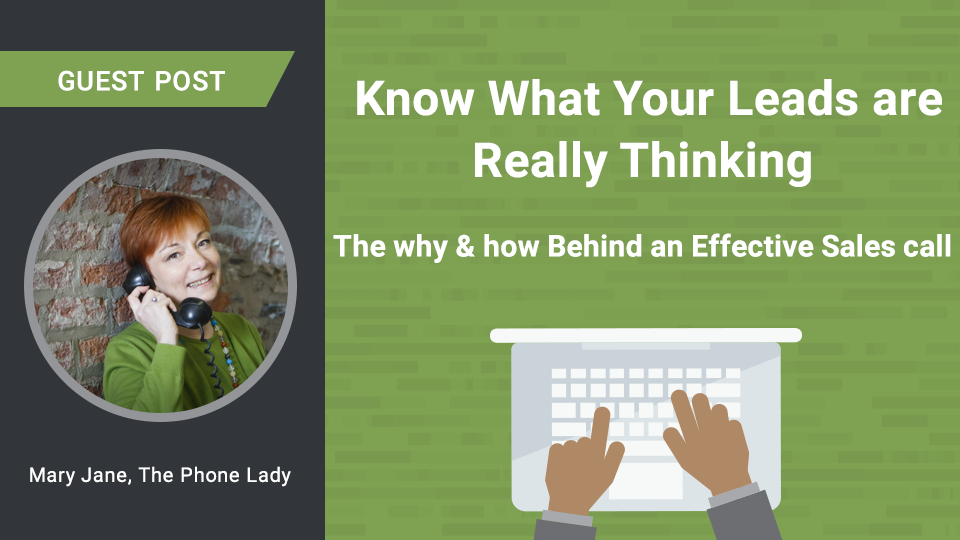 Mary Jane, also known as The Phone Lady, has spent 30 years analyzing the psychology of a phone call. An independent consultant, she’s worked with over 400 companies and trained over 10,000 individuals to close more deals, faster, by picking up the phone. You can connect with her on Twitter @thephoneladyca.

Recently, I sat down with Mary Jane to chat about; how to deal with a prospect that doesn’t respond, and how to balance being courteous yet efficient on a sales call.

Phone vs Email: What real benefit does picking up the phone have?

It could mean so many things, and yet we’re taking those words off the screen and we’re carving them in stone in our business. You really need to understand that email is data. It can’t express emotion and it can’t reveal the thoughts behind the words. But the human voice gives you all of that.

If they aren’t clicking through or downloading resources anymore, what it could mean is that they are still very interested but their workload has doubled suddenly. Or, you could be right that they’ve moved on and aren’t interested anymore. Or, they may have one question that they are trying to research the answer to.

By making that phone call, you either answer that question, you learn they’re aren’t a valid lead anymore and take them off your list, or you begin creating a relationship that is an opportunity for a sale.

What role does timing play in all of this?

Sales is all about the timing.

Let’s say, you call and they say, “Oh, well, you know, I was interested, but I think it’s a couple of years out…or a year out…or 6 months out”, whatever they say.

That’s important to know too because you can refine your drip campaign or your follow up based on that. So knowing they are a valid lead, as opposed to totally invalid, then you can figure out:

It’s about being top of mind at the right moment and you’re not going to know exactly when that great moment is – so you always want to stay top of mind in some way.

How do you decide when and how to follow up?

So for some reason, our own lives can be really full, really stressful, and overwhelming, and yet we think that everybody else’s life is not like that. But, of course it is.

It’s an unintended consequence of technology that we are busier today than we were 3 years ago…5 years ago…7 years ago. So certainly, in 1990, I was able to get the CEO of Chrysler on the phone. No problem. Today, I could do that, but it would take a very long time.

How do you coach people to not assume the “No”?

Our human psychology is to think the negative. You have to practice believing that they haven’t made a decision yet and it’s not about you. Eventually, you’ll have so much proof in that direction, that you’ll stop thinking it all together.

But you need the proof. My telling you isn’t enough proof, but experiencing it again and again will be.

We all struggle to stay on top of our emails. I’m not very good at it! Even though I have a few hours a day when I can focus on it, I’m usually tired and it’s the end of a busy day, etc. We’re all doing that, so why would you think your prospects are not doing that?

What are some of the results you see from your training programs?

Number one, more confidence on the phone. Even seasoned salespeople are experiencing more reluctance around picking up the phone because connections and conversations aren’t happening the same way they were four years ago. They are making less calls because the old skills simply don’t work any more.

More confidence that they’re going to get their prospect’s attention or their client’s attention means they’re going to reach more people. The metrics that I get back from my clients are, around 25% more conversations happen post-training. So 25% more conversations i.e. connecting with someone through a callback or actually reaching them, or a 25% increase in demos or meetings.

How do you balance being courteous and keeping a Sales call moving?

Be very present to not only asking your question, and obviously listening to the answer, but closing off that question before you move to the next one. So, whether that’s a phrase you lean on like, “Well thanks for that. That was all of the detail I need.” Or, “This is really great information. Now my next question is…” So in other words, you need a segue or some appreciation for what they’ve just given you.

I think sometimes we avoid these because we are concerned we’ll end up with somebody who’s going to start talking about their vacation. Really, in a B2B environment, it’s unlikely that’s going to occur – because everybody is overwhelmed. So they’re not interested in taking up anymore of their time, than you are in losing some of your time to their conversation.

If you liked what Mary Jane had to say, head to The Phone Lady website to check out her blog.

Data is at the core of virtually everything we do as digital marketers. It powers how, when, and where we talk to our customers and prospects. And there’s a lot of it. In fact, as marketers it’s easy to feel overwhelmed by the sheer amount of data at our disposal. It’s estimated that Internet users […] 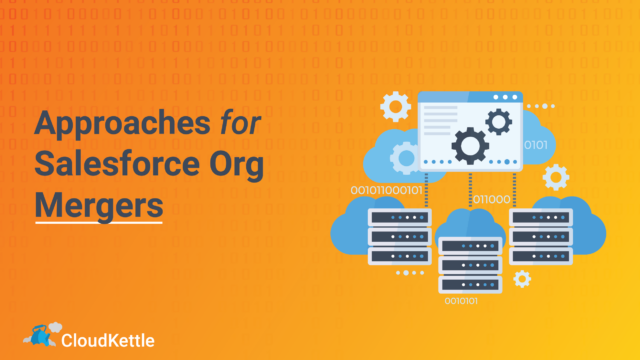 Imagine this scenario: Two separate companies have heavily customized Salesforce orgs that work perfectly for their own respective business needs. Then, one company acquires the other company.  Overview The Two Approaches Lift-and-Shift Move-and-Improve (Optimization) The Third Rail It Isn’t Just Salesforce How CloudKettle Can Help What happens next? That’s a great question – and a […]